Guess what folks, if you are not as lucky as Claire or my mum, you too can now get your own Colin from Sainsbury's. Yes, Sainsbury's. They're starting to sell pieces of ME and at a very affordable price too. 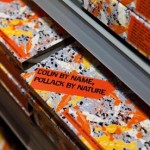 If you're interested, head on over to the frozen fish section in your local Sainsbury's and get a piece of me. From the Guardian article...

Pollack, once deemed fit only for the cat, is being given a new name by the supermarket chain Sainsbury's after research showed that many customers were embarrassed to ask for it. Consumers are to be urged to try "colin and chips" on Fridays in preference to their usual haddock and chips. The new name (pronounced co-lan) is French for pollack when cooked, and reflects France's love affair with the British product.

This is so wrong on many counts:

So if you're feeling hungry, and want to help the dwindling cod supplies, head on over to Sainsbury's and pick up a box of frozen me pieces or me fingers and have them with chips and All Gold Tomato Sauce - the best tomato sauce in the world.