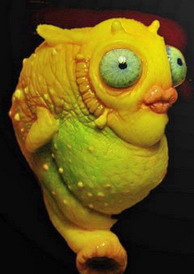 I was listening to the radio the other morning when they mentioned a new mobile phone application developed by the U.S. Department of Defense for use by soldiers in Afghanistan and it instantly made me think of The Hitchhiker's Guide to the Galaxy.

This application is called, Translation System for Tactical Use (TRANSTAC). It provides sentence and phrase translation to and from English, Pashto and Dari allowing soldiers to communicate with the local Afghan people and essentially hold a conversation between the languages without having to actually learn another language. I was quite impressed by this idea and the fact it's actually a reality and naturally my mind started to wonder about the possibilities.

This application is currently still in beta and only in use by the US military, but imagine what could happen. It starts off as a military only application. The US DoD release it to the public for use on their own mobile phones. Someone enhances it so it translates voice coming in on the phone line and outputs the translated speech to your ear in almost real-time without you knowing. A company takes this enhancement and creates a dedicated device which does real-time translation. They then enhance it and make it smaller and smaller until it's the size of a hearing aid.

At this point you have a real-world example of a Babelfish. If this were then affordable, it could become a commodity product with everyone having one and no one ever needing to learn another language ever again. You speak your native tongue and whoever you are speaking to will understand you without having ever learnt a word of your language, and vice-versa. Now that would be brilliant.

I know it's a little far-fetched, but people said the same thing about computers in the home and look how small they are now and how many people have one. If there's the demand and the market, this could definitely become a reality.