As you will have no doubt seen our first child, a lovely little girl, Lara, was born on 14 January 2010 at the John Radcliffe hospital in Oxford and weighed in at a very petite 1.806kg. I haven't written very much about her since as things have been far from simple but I hope to fill everyone in on the events, dating back to the 20 week scan, over the next few posts. This is to fill everyone in, document our experience and also help come to terms with the whole event.

Back at our 20 week scan (9 Sept 2009), the sonographer detected that Lara was on the small side for her gestation age and suggested we went back 2 weeks later for a growth check and for a more specialist sonographer to check the baby. Two weeks later (23 Sept 2009) we duly attended our appointment in which the sonographer confirmed that Lara was indeed very small, but growing. She also however picked up a problem with Lara's heart. She wasn't quite sure what, but her initial suspicions were the heart was slightly rotated. Accordingly she referred us to the John Radcliffe hospital in Oxford for an ultrascan to be performed by a fetal cardiologist. A week later (30 September) we headed up to Oxford for our scan with the fetal caridologist - Dr Archer - who sadly confirmed that our sonographer in Reading had indeed spotted something that was very hard to see. Lara did indeed have a heart problem and his initial suspicions were that Lara had a coarctation (narrowing) or complete interruption of the aortic arch 1 & 2 and a ventricular septal defect (VSD)3. 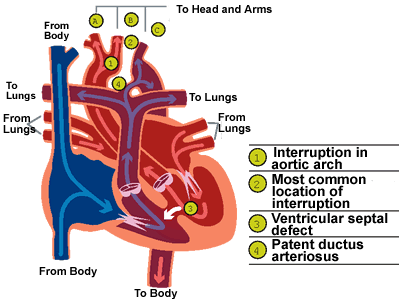 As you can imagine, we were absolutely devastated to hear this news and the doctor and an accompanying nurse were very understanding and supportive and gave us more information on the problems, possible cause - short of genetic disorders, they don't really know what causes these problems - and possible outcomes, including termination, and treatment which would involve putting Lara onto a prostaglandin infusion immediately after birth to keep her fetal cardiac system working as it did in the womb - essentially keeping the patent ductus arteriosus 4 open and thus providing oxygenated blood to the body - until such time as corrective open heart surgery could take place. The general prognosis was good given no underlying genetic issues were found and that surgery went to plan.

At this point we agreed to an amniocentesis to rule out the 4 common genetic disorders, Down's Syndrome, Edward's syndrome, Turner's Syndrome and Patau syndrome, but also to rule out another likely genetic disorder commonly associated with these cardiac problems: 22q11.2 deletion syndrome also known as DiGeorge Syndrome. About two weeks later we received the results and much to our relief we were all clear for all the genetic disorders tested, though we were cautioned that the 22q11.2 deletion is a lot harder to detect and their testing may not pick up very very small micro-deletions. With this terrific news and given Lara's petite size for her gestation age, we started fortnightly treks up to Oxford for continued growth checks and checks on Lara's heart with another fetal cardiologist, Dr Manning. Dr Manning very quickly confirmed Dr Archer's findings but was more confident Lara had a complete interruption of the aorta and not just a coarctation. She agreed with the suspected VSD.

As the weeks progressed, Lara continued to grow along her chosen, albeit smaller than expected, path and Dr Manning was able to confirm the VSD and interruption. Other than the small growth and heart issues, Lara was behaving as any other baby within the womb so there was nothing further to be concerned about and the plan was to see things through to the original due date of 26 January 2010 and have a normal delivery. As we approached due date the doctors became a bit concerned that Lara's growth was slowing. She was also breech which would make a normal delivery harder and more likely to distress Lara.

On 4 January 2010 we attended what would turn out to be our last appointment with Dr Manning. At this appointment, Dr Manning wanted to see if it was possible to manually turn Lara if she was still breech. During the examination it was found Lara was indeed still breech, but also lying with an extended neck which would make turning very hard without hurting Claire or Lara. It was at that point that Dr Manning decided an elective caesarian section on the following Tuesday (12 January 2010) would be best and the wheels were put in motion and we were told to come in for 7:30am to be "booked in". We were warned that the delivery was however very dependent on there being a bed available in the Special Care Baby Unit (SCBU) for Lara.

As luck would have it, Mother Nature chose the rest of that week to bring the UK to it's knees again by dumping another huge load of snow on us. Thankfully things cleared up a bit by the Friday so we used public transport to visit the anaesthetist office to go through all the necessary paperwork and pre-surgery discussions. Things continued to clear over the weekend and things were looking good on Tuesday morning when we woke up at some insane time of the morning and made our way up to Oxford for a 7:30am check-in. I was über prepared with a huge bag of snacks and goodies to keep me fed and entertained for the day.

Once there it became a waiting game and at about 9am we were told that there weren't any available beds in SCBU so we'd have to post-pone the birth. Following a bit of to-ing and fro-ing by us and the surgical assistant/nurse and a lot of waiting, it was established that there wasn't likely to be space on the Wednesday either but probably would be on the Thursday, so we headed home with the intention of coming back on the Thursday morning. Wednesday evening we received an unexpected call from Dr Manning asking where we were. I confirmed we were at home and would be heading up the next morning. She'd apparently had had other ideas earlier in the day and had asked the relevant nurses to arrange that we went up and stay the Wednesday evening in preparation for Thursday morning. Given the recent snow falls, she didn't want us to get stuck and miss our "slot". Unfortunately, something got lost somewhere as the first we heard of this plan was when Dr Manning called. With that news, we packed what little we had unpacked and headed up to Oxford again.

That night wasn't the best night either of us have had: both of us were anxious, Claire was on a ward right opposite the noisy nurses' station and I got a bed in the day ward down the corridor.

Anyway, we made it through the night and got the good news the next morning to say a space was available in SCBU and the wheels were put into motion. Soon enough we were downstairs in the delivery suite waiting for Claire to be wheeled away to theatre and for me to join her once she was all setup and ready to go. 12:30 arrived and Claire was wheeled off for her anaesthetic and about 20 mins later I joined her in theatre.

At 13:08 Lara Nieve Seymour made her grand appearance and so began week one of Lara's life outside the womb.

Note: I've deliberately disabled comments on this and subsequent posts. The final post will however be open for comments.