It was only yesterday I was commenting on how winter has arrived already. Well, I can confirm it most definitely has. It snowed last night. It's certainly not the thickest snow I've seen in the UK, but certainly think it's the first time it's snowed in October since I've lived in the UK.

Here are a few pics I took last night just before bed and then one this morning... 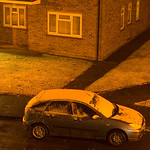 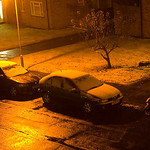 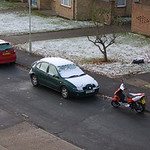 Getting my car out was a challenge too. The snow had mixed with the rain that preceded it, so I had to chisel off a thick solid layer of ice and snow from my car. The snow/ice combo was just like the ice build up you get on the edge of the freezer when you don't close the door properly. Great fun to remove and fecking cold, but not as much fun as watching the neighbour realise he couldn't actually get into his car. All the doors were frozen shut :-D .