This is part three of a very long trail of posts about our beautiful daughter, Lara. If you haven't read the first two parts - Build Up To Lara's Birth and Lara's First Week - already, now is a good time to do so and come back. It'll put a lot of what is said here into context.

Lara's second week got off to a flying start. She put on 83g literally overnight and rocketed passed the 2kg mark at her weigh-in on 22 January. This was fantastic news as it meant that Lara now qualified to "graduate" to the cardio-respiratory ward (Bellhouse) in the main children's hospital. It also meant...

The last two were the most important for us as up to this point we'd been traveling up to Oxford everyday to see Lara as it was significantly cheaper than staying in a hotel or B&B in Oxford (it is a popular tourist destination after all).

When we left Lara that evening, the nurses were seriously considering moving Lara over to Bellhouse ward that evening (following a short move down the corridor within SCBU) as one of the consultants that's been keeping an eye on her, Dr Bentham (affectionately known as Jamie by all the staff), was working that weekend. By the time we got home, they'd made the decision and moved her, or more precisely, they were forced by an unexpected influx of patients. 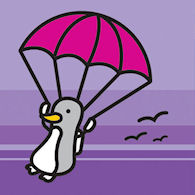 We went to visit Lara the next day and wow what a difference. The childrens' hospital is a new, bright and colourful wing in the hospital and the Bellhouse ward is worlds away from the cold and clinical feel of SCBU. Lara was moved to a huge room with 4 other beds, though only one other was occupied, and was given a window slot too.

Lara spent the next five days doing exactly what she was perfectly skilled to do: eat, sleep, poop and grow. During this time she was "upgraded" from the incubator she'd been in since SCBU into a cot. The nurses felt she really wasn't actually using any of the functionality the incubator provided, so they moved her to a cot. This not only made access sooo much easier, it also meant she could start wearing clothes and start enjoying a semi-normal life. Despite all the growing Lara has been doing, seeing her in a cot and her own clothes gave us a real idea of just how small she was. In a word: tiny as you can see when we laid her "friend for life", Pudding, next to her...

The early part of the second week also saw a visit from the geneticists who'd taken some blood samples, photos, x-rays and notes on Lara. I believe they took some samples when she was first born, but needed to gather more information and also get a few answers about Claire and me. Ever since Lara was diagnosed with the heart condition, a genetic cause has always been suspected, especially when it was discovered she was very small for her gestation age. All initial tests hadn't brought up any of the common genetic problems so they were gathering more information to try an asses things on a more in-depth research basis. This would be far more extensive and would take longer than all the other testing. To date (8 March 2010), we've still not heard back from the geneticists, but have been advised by our GP to follow up at the end of March if we've not heard anything by then.

This wasn't the only "upgrade" this week. Later in the week Lara was "upgraded" again, this time to a cubicle room - a private room with a built-in bed for a parent and en-suite facilities. Up to this point Claire had been reluctant to stay as she was still suffering discomfort from the c-section and the bedside bed for the parents was just a low fold-away bed which would have been very tough and painful to get in and out of, not to mention not very private. The cubical room allowed Claire to stay with Lara. I continued to commute back and forth, but only every other day.

The end of the second week saw the doctors up Lara's feeds to 46ml every 3 hours and after a few days they started to suspect she may actually have been retaining fluid (a common side effect of the prostin), so they put her on a diuretic on Friday morning. This worked beautifully as she was soaked through on her first change after the diuretic. As a result, Lara's weight dropped down to 2.09kg (from a high of 2.135kg) but the doctors were happy it was not fluid weight. They were also happy with her progress and told us they'd let her be for the next week and re-assess her on the following Thursday.

All Lara had to do now was lie back, relax and grow.

Note: I've deliberately disabled comments on this and subsequent posts. The final post will however be open for comments.