Ever thought what would happen if you took a bit of Segway genius and mixed it with some of GM's desire to be green? No? Neither did I, but someone obviously did and come up with the P.U.M.A - Personal
Urban Mobility & Accessibility - prototype. 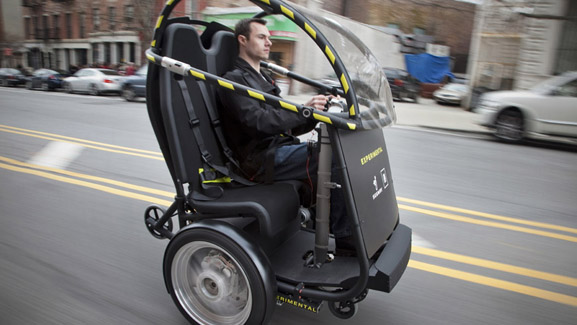 As you can see, it's essentially a 2 person Segway that goes further (up to 35 miles) and faster (up to 35mph). You can also see it's not the most attractive or weatherproof thing, but that's not surprising given it's only a prototype at the moment.

According to this article, it's part of GM's plans to become a "purveyor of fuel-efficient vehicles". The companies have not release a projected cost for the vehicle, but said ...

... ideally its total operating cost - including purchase price, insurance, maintenance and fuel - would total between one-fourth and one-third of that of the average traditional vehicle.

An "average traditional vehicle" in who's mind? Remember GM are responsible for the Hummer.

Given GM's recent financial woes, it'll be interesting to see if this ever reaches the market, if it's approved "road legal" by countries like the UK and just how expensive it'll be.

If these do come to light, we may well start to see young people legitimately in "mobility vehicles" :-D