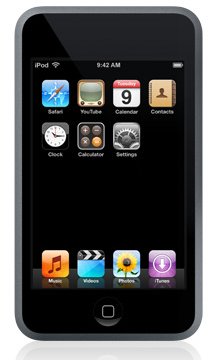 Apple announced a new iPod yesterday - the iPod Touch. As you can see, it looks a lot like the iPhone, because essentially that's exactly what it is: an iPhone without the phone, camera and email bits.

It's taken multimedia players to the next level with built in WiFi support so you can browse the internet whilst listening to your tunes. You can also now download tracks from the iTunes store directly to the iPod, so in theory you'll never need a computer to use the iPod Touch. And look ma, no buttons, thanks to it's fancy touch sensitive screen (should I say scratch trap?) .

Now everybody say "Oooooooo, I want one".

I quite like the idea of having one of these sleek looking devices in my pocket, primarily for the added functionality, but I'm not going to dash out and get one just yet for several reasons:

This makes me think - do you think Apple plan on filling the $599 gap that the old iPhone held with a new iPhone that will actually be of use to people, ie has 3G support?

Anyway, I think I'll be holding off on getting one of these. I've got much more important things to spend my money on at the moment, but if Santa Clause wants to pop one in my stocking this Christmas, I won't mind.

Come to think of it, if Santa Clause could please hurry up with those flights and tickets I asked for a while back, I'd really appreciate it; the T20 World Cup starts next week.