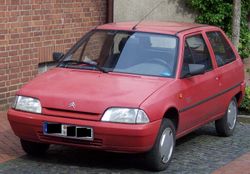 On Monday last week Claire's little car, Red, decided he wanted a duvet day, but only thought to tell Claire on the way to work, and in the most inconvenient of ways - by losing all power - the electrical kind. Claire managed to get to work and at lunch she popped out to see how little Red was feeling. Red seemed to be feeling much better. He turned over and the lights and radio seemed to work ok.

That evening Claire braved it a decided to use Red to get home instead of the horrid public transport. Bad idea. Poor little Red hadn't recovered and decided to give up the ghost between Henley and Wargrave - right at a set of traffic lights with no hard shoulder or anywhere to move the car. Pushing wasn't an option as the car was on a downhill slope into a very narrow dip - the lights she broke down at are there to ensure only one direction of traffic goes through the narrow dip at a time.

To make matters worse, the weather was really bad - we'd been experiencing a combination of rain, snow and hail all day, and things were no better. So Claire chose to take up the kind offer of a passerby and abandoned Red and got a lift to the nearest BP. In the process she called me.

I cancelled my evening's gym visit and headed over to help Claire out. I tried to start poor little Red, but nada, nothing. He was kaput. Seems like the alternator wasn't charging the battery and it had gone flat.

So we abandoned Red again, jumped in my car and headed home to use the Internet to see who would allow Claire to join there and then and still rescue Red that evening. You'd think all of the recovery services would be keen to do this, but only the RAC seemed to make any attempt at advertising it. Lucky them, as they have a new customer and they only charged a small premium for the "emergency joining".

Once covered, it was back to Red to meet the RAC man. We were told we'd get a call 10 mins before the RAC man got to the car, so we chose to bide our time at a very nice pub in Wargrave - only 2 mins from where Red had broken down.

It wasn't long before we got a call from the RAC man, who was sounding a little annoyed. Apparently he was already at Red which was in the process of being checked by the police (we can't confirm the part about the police though). Anyway, like me, the RAC man thought it sounded like an alternator problem, and guess how he tried to fix it... with a hammer. Yes a HAMMER!! His thinking was that the brushes in the alternator were stuck and just needed a little tap to release them. Well, unfortunately he was wrong as all the banging in the world didn't seem to make a blind bit of difference.

As Red was only 5 miles from home, the RAC man came up with a good idea... he'll swap Red's battery with one he had and we'd drive like crazy to get Red home before the battery died. I was the lucky one who got to do the crazy dash home in Red, and it was a close call too - we were about 500m from home when Red started to lose power. Nothing quite as bad as Claire had, but the lights started dimming, and quite rapidly too.

Once home, the RAC man took back his battery and left Red's in the footwell of the passenger seat with the suggestion that we could charge it and then drive the car to a mechanic. Good thinking batman - now where did I leave that charger, oh yes, it's still in Halfords ;-) 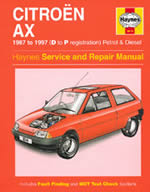 Sunday morning I decided I'd go have a look at Red - I'm not a mechanic, but I had a Haynes manual in my hand (thanks Alan), so what more could I need? Well, as it turned out... nothing more. It would seem anyone with a Citroen AX and a Haynes manual can do just about anything if they wanted to - except maybe a Topgear convertible conversion or any of their other hair-brained ideas. Come to think of it, Red would make a great rocket.

I'm not 100% sure what was wrong, but I reconnected several of the wires that connect to the alternator, ensured all cables were securely fastened, ensured the alternator rotated by hand, put the battery in and started the car. Literally, that's all I did. I then tried to run the battery flat by driving around Earley with the radio and lights on, the heater on full whack and the windows wound down (to keep cool). After an hour of this Red was still going strong, with the only annoyance being the squeal of a fan belt (or similar) every time I pulled off. As Red doesn't have a fan belt (motor driven fan) I suspected this was the alternator belt, so I just tightened the tension on this and no more squealing.

Touch wood, Red has been fine ever since and he's not squealed once since my little adjustment. So that goes to show, if you drive an old car, you don't need a mechanic, just a Haynes guide and a little bit of common sense.