Take the time to browse through these 33 impressive World Cup murals created by a Cape Town based illustration house Am I Collective on behalf of New York based Weiden & Kennedy for their client ESPN. 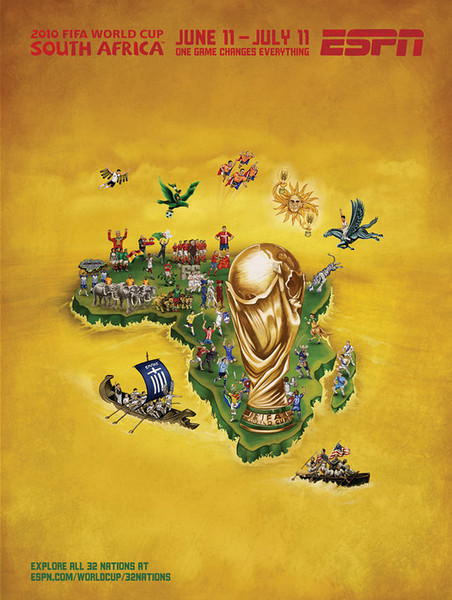 The murals, one for each country taking part in the World Cup and a combined image, were created in the style of 1980s Ghanaian movie posters and will be appearing in various forms over the next few weeks including: printed ads, billboards, bus shelters, hand-painted murals on buildings, food trucks, a print insert, 3’x4’ art gallery pieces, art books, digital banners and rich media banners, in major markets across the United States (New York, Chicago, LA, San Francisco, Philadelphia), and online. They're also slowly rolling out at Vanity Fair, which is including an image in its World Cup preview blurbs.

Now, whilst the images look like they may have come from a children's story book, I think they'd make an impressive display as a set - printed, framed and mounted as posters on a big empty wall.