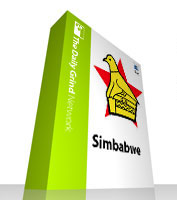 You'll never guess what I found today - a game called "Simbabwe". It's works just like Sim City and The Sims work, but with a slight difference. Instead of building everything from scratch, it's a game...

...where the property is already owned and the houses built and you compete to burn and dispossess them. Bounce around the map plundering farms, denying grain silos to opposition supporters and robbing the community chest.

It's Mac only, so I downloaded it and took it for a quick spin. It starts off the main menu setup as the front page of "The Hararald" newpaper with each headline as a cleverly disguised menu options and a nice little touch with the price in the top right corner continually incrementing. Clicking the first headline takes you to the main game and this is pretty much where the "SimCity" idea end and it takes on a more Monoloply like role. I whizzed round the board a couple of times just for the fun of it.

Other than taking a lot of pretty good jabs at the way Robert Mugabe has ruined Zim, it's a bit of a tedious and crap game, but the comments and quips can be quite humourous at times. Be sure to check out the other comments and screenshot on the developer's site.