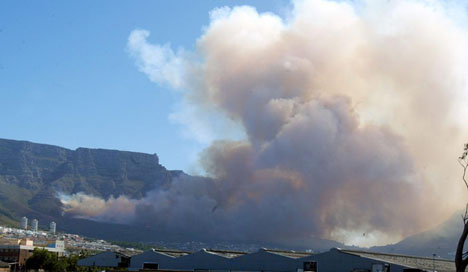 Unfortunately, due to a minority of British tourists, the Brits have a bit of a reputation of not being entirely respectful towards the people and countries they visit, and this is just one example.

The streets of Cape Town are in chaos after some bozo thought it would be a good idea to throw his cigarette butt out the car window whilst on Table Mountain. Apparently, he then saw the fire start and attempted to scarper.

What were you thinking fool? You don't see us Sefricans trooping through Buck Palace or Windsor Castle flicking cigarette stompies here and there to see if things catch fire, do you? Have a little respect, will you.

The arsonist has been named and charged and I really hope, for his sake, that he gets locked up before anyone on the streets gets the chance to lynch him. He's single handedly managed to make one of the most beautiful cities in the world look a mess.

You can see more pictures on the Die Burger (The Citizen) website. The site is all in Afrikaans, but you can click through the pictures by clicking the "Volgende" link above the picture.