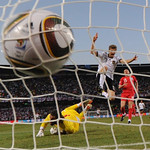 As you have no doubt heard by now, my second choice team (behind Bafana Bafana), England, crashed out of the World Cup on Sunday with a shocking performance against Germany in Bloemfontein.

Claire and I didn't watch the game. Instead we opted to spend the hottest day of the year outside enjoying the sunshine, taking in the fresh air and a couple of drinks at a nearby pub that was NOT showing the football (a good thing - they also do really good real ales) instead of being glued to the tellybox or cramming ourselves into a noisy hot pub. I've now watched the highlights and I think Germany deserved their win. They were worlds better than England and showed a lot more skill, speed (wow they were quick), passion and desire to actually win than any one of the England players. In fact, the most passionate man on the England side was the manager.

Now of course, being in England I get to hear all the whining and complaining about the disallowed goal (people really think England may have won had this been allowed, I don't think so) and about the poor state of English football and what needs to be done about it. I suspect the usual process will happen: people will belly-ache about it for a while, fingers will be pointed, the FA will fire the manager (<sarcasm>because that's always worked in the past hasn't it?</sarcasm>) and the players will return to the more lucrative Premier League football and nothing more will be done about it. Then we'll go through the same process when England crash out of the Euros and the next World Cup and the endless cycle will continue.

I don't watch a lot of football and by no means profess to know what I'm talking about when it comes to the politics of football, so forgive me for my ignorance whilst I throw my 2 pennies into the pot.

I can't help but think the current "blame the manager" ethos is probably not the right one to use to solve these problems. Yes, he picked the players and management team, devised the starting formation and thought up some of the tactics, but this is football played with humans who have their own skills, passion and desires, not Subbuteo. Invariably, the manager is the one on the side line screaming his head off like a banshee and actually showing some passion for the game. I often think the manager is like a parent of an insubordinate child and no amount of screaming and shouting is going to get the players to do what he wants. So if he's the one actually showing the conviction and passion, why is he always the one to be fired? Why does continually firing and hiring managers not solve the problem? Why don't we ever hear of the entire England team being docked pay, or fired or similar for a shocking performance? The players are ultimately responsible for putting the ball in the back of the net, not the manager. He's a manager, not a puppet master, or am I giving too much credit to the player's here?

Maybe the current talk of too much football, too much Premier League power, too much money and not enough development of local talent has some weight in accounting for England's long running poor performance. Maybe all English football needs is a cap on salaries, docking of pay for poor performances, lack of respect and blatant girly dives and maybe a limit on the number of international players allowed in the Premier League. England needs to develop the skills, passion, desire and hunger for victory in it's upcoming English players and if it means cutting pay and limiting international players, then so be it.

I think football as a whole could do with looking to other sports like cricket, hockey and rugby for a couple of tips on improving the game: video referrals and respect instantly come to mind. We're in the 21st century now with a lot of money invested in sports. A little bit of technology is not going to ruin the game. As the for the respect: I'm always shocked and annoyed by players thinking they have a right to argue against the referee's decision. He's the one in charge on the field, not the players. What he says goes and if anyone has any doubt about a decision, then it's up to the captains to discuss it with the referee in an amicable way. The only people who should be speaking to the ref during a game should be the captains and the player getting bollocked. The general respect given to the officials by players and managers is appalling.

Oh and the fairy diving needs to stop too: the players call themselves men, so why don't they behave like men? It was refreshing to watch last night's game between Brazil and Chile where there were plenty opportunities to dive, but they weren't taken. Why? Are the South American players really that much better at staying on their feet? I don't think so.

Right, I've got that off my chest, so it's time to step off my soapbox and go and watch the remainder of the World Cup and then it's back to rugby and cricket for me. The penultimate Tri-nations (it'll be four nations in 2012) is coming up and I think we're in for another great tournament this year.