Thanks to yesterday's foiling of a terrorist plot to use liquid explosives in a bid to blow several planes out of the sky, everyone flying from the UK can have no hand luggage.

In the US, things are completely different...

You can have hand luggage, but no liquids or gels. You have to dump your liquids before the security check point as this picture from Dulles International in Washington shows: 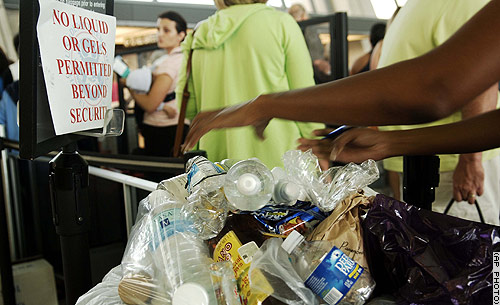 Good idea, but don't you think putting a bin in the middle of the crowd kind of defeats the point? Yes, you stop an aeroplane being blown to pieces in mid-air, but what about the 5000 people hanging about in the airport? Genius, absolutely genius!!!

If the security people at Dulles (yes, the airport is just as dull as the name implies) are geniuses , the security people at Asheville Regional Airport are the next Einsteins... they've got the same idea, but instead of just piling the bottles etc in a bin, they expect you to empty the contents into a "recepticle". 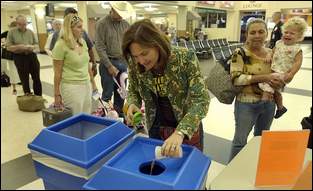 Ermmm, isn't that doing the job of the terrorist for them? What a brilliant idea!!! Dumbass!!!