A couple of weeks ago, Jonathan Ross, on his show Friday Night With Jonathan Ross, mentioned Marks And Spencer's Pain Au Chocolat Bread & Putter Pudding and how bad it was for you. Well, Claire and I happened to be in M&S yesterday, spotted one of these and thought we'd give it a try.

I was originally going to write about this dessert based on what was mentioned on TV and what I could find on the internet, but either M&S are very good at stopping people writing about it (it's not even mentioned on their website), or people just haven't had much to say about it. So what better way to find out about something than try it yourself.

Well, I can confirm, it's very very very yummy. It's like warm chocolate heaven in a foil dish, but unfortunately, it's also a coronary waiting to happen.

Check out the nutritional information: 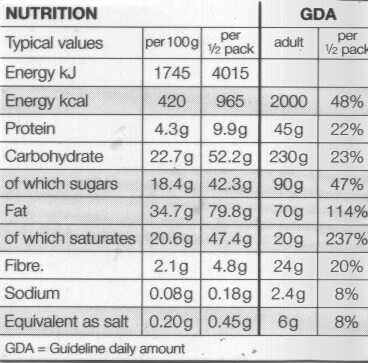 I've not altered this in any way and your eyes are NOT deceiving you. This really is the "nutritional" break down of this tasty pudding, I scanned it from the packaging, and as you can see it's unbelievable.

This wasn't by any means the highest calorie dessert on the M&S shelves (there was another chocolate pudding with more sugar, thus bumping the calories), however this was the one with the highest fat content. It's worth pointing out that this pudding weighs 460g, and as they've quoted the figures "per ½ pack", I'd say they're suggesting this pudding is for 2 people to share.

So a mere 230g of this delicious dessert will provide a woman with nearly half her day's calories, nearly half the recommended amount of sugar intake, and a whopping 114% of recommended daily fat, most of which is saturated.

This pudding is sooooo tasty that you could quite easily polish off the whole thing yourself in one sitting, and then still want more. The saddest thing about this whole dessert is that you just know there are people out there who treat themselves to one of these on a regular basis, and still actually eat something else during the day.

If you're going to try one of these, I recommend you go for a long hard run before and after eating your small portion - I don't want to be responsible for inflicting a heart attack on anyone.

Oh, and before you ask, Claire and I did NOT eat all of it ourselves. We split it 3 ways as Alan was staying over, so we only had about 150g each. Just as well we're all still young and reasonably fit. That lard shouldn't sit around for too long ;-)