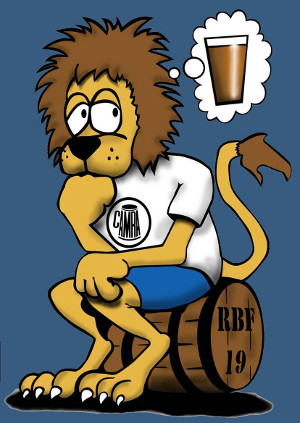 Last night I kicked off my bank holiday weekend by visiting the Reading Beer Festival for a little tasting session before the weekend got into full swing.

Claire and I went to the Friday evening last year and whilst it was great to see and try so many different beers and ciders, it was freezing cold and the field was very muddy. Not this year. This year we had (and are still having) beautiful sunshine with slightly cool breeze.

Despite the sunshine, I think the festival organisers have done a much better job with the planning and layout of the site and have definitely catered for the "when it rains" rather than the "if it rains" approach they appeared to take last year. Last year there were two moderately sized marquees which housed the bevvies and tables. This was definitely a "if it rains" layout as I don't think the inside was big enough to comfortably house most of the visitors and you needed to go out into the cold and mud in order to switch marquees. This year they went for one great big marque to which they attached a smaller marque at the far end to form a single continuous L-shape marquee with tons of undercover space. It doesn't look like they'll be needing it much this year, but that's what planning is all about.

Anyway, enough about the site and planning, what about the beers? Well, there are a lot of beers and ciders on tap this year. According to the website: over 550 real ales and 150 ciders along with a selection of foreign beers and British wines too. As I'm racing on Monday (the primary reason for going last night) I didn't even attempt to get close to sampling all 550 beers, but I did have a modest sampling over the evening.

Now you'd think going to a beer festival is a simple matter of turning up, paying money, getting a glass and then repeatedly filling it and emptying it until you fall over and you'd be right in the grand scheme of things. However you're missing the finer details: choosing which beers you're going to try and in which order so you can actually taste them and enjoy the explosion, or not, of flavours. You could think of it as devising a strategy. Marching straight up to the mighty hoppy beers will squash any chances of tasting the finer notes of the lesser hopped ales consumed later. Drinking the too many of the high alcohol beers will also see you cutting your sampling session short.

Last year Claire and I concentrated more on the LocAle (local ales) end of the marquees. This year we opted for the lighter coloured and strength beers from the "rest of Britain" end of the giant marquee. This was deliberate. We regularly frequent LocAle accredited pubs around Reading so we're more likely to stumble upon the LocAles than the rest. Concentrating on the lighter beers meant we could enjoy the more summery beers (it was nice and sunny after all) and sample a good few of them without getting rat-arsed.

To ensure maximum coverage, Claire and I like to get different beers and then share the tasting. I then check in my beers into Untappd. Looking at my Untappd log for last night, I think we did a good job and managed to mostly stick around the lighter "rest of Britain" ales as planned...

As all the ales are in casks we did have a few expected disappointments. As the beer festival spans the whole weekend, many of the ales are delivered "almost ready" so they're available later in the weekend. Several of the tasty sounding ones weren't ready yet, which I suppose is one of the prices you pay for going on the first evening. I'll just have to add those to my wishlist and try them next time :-) There were also a few swaps or missing ales, probably due to quality issues... you can't really attempt to serve a sub-standard beer at a festival full of paid up CAMRA beer nuts (like me). One of the guys sitting at our table was from Ascot Ales and he was saying he'd already sent one of his own casks back as it tasted like TCP, so I suspect they may have been a few more.

Before I finish off, I'll like to come back to the logistics side again as I think they warrant a few comments. This year the festival tried a few other things differently. Instead of one big day long session, they've split Friday, Saturday and Sunday into two sessions each and you pay by the session. You also have to leave between the sessions, even if you bought two successive sessions. Several die-hard fans weren't too happy with this idea, but I think it makes loads of sense. Not everyone wants to show up at 11am and drink non-stop until kickout. Splitting the day into sessions gives more people a chance to attend the festival and should in theory lead to shorter queues.

I also like that they are giving the glass for free instead of asking for a refundable deposit (for those who don't want to keep the glass). Apparently this actually saves them money as it costs more to wash all the returned glasses than it does to give them away.

I didn't drink anything stronger so I don't know what the prices are for the higher strength beers and ciders is.

All in all a good evening and I'll definitely be back next year, maybe for a few sessions instead of just one :-P

Oh yes, and as I was only drinking thirds, the beer monkey didn't get me so I don't need much in the way of recovery before my marathon... just some sleep from the late night. Bonus!!