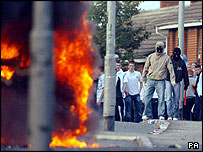 Yesterday, another Orange Order parade was prohibited and physically prevented from passing through a predominantly catholic area by the police and armed forces. This is not the first time this has happened, and from my point of view, actually ends up being an annual thing - the Protestant Orange Order start planning their annual historic march through Belfast - the Parades Commission steps in and says they can't march through certain catholic areas and suggest an alternate route - the police setup barricades on the original route (just in case) and the march takes place.

Well, yesterday all hell broke loose. They marched as planned and then encountered the police barricade that they knew would be there. Then they got all worked up and angry about being prevented from passing through the catholic area and then proceeded to throw their toys - which, as they're men, included petrol bombs, bricks, stones and even gunfire. Things spiraled out of control as masked guys hijacked cars and set them on fire and generally caused mayhem in the area.

I'm not Irish, catholic or a member of the Orange Order so I may not have the full picture about the events and the history behind the whole parade, but one thing still defeats me - these guys are very proud about their Order, it's history and what it stands for, but they don't seem to be too proud of their own neighbourhood - surely they have just made a huge big mess of the predominantly Protestant area they all live in? Effectively leaving a great big steamer on their own doorstep. Why?