Well, well, well. It appears the banking world is finally being taught a lesson that gambling is bad, especially if it's not your money. In a sanctimonious sort of way, I can't help by think to myself "I told you so". I've been thinking about the every growing greed of the banking world over the last few years and the ever increasingly dangerous methods they've used just to make an extra buck or million, and this weeks seems to be the wake-up call the banking world needs.

Take the whole sub-prime mortgage shenanigans which seems to have been the trigger for all this - would you lend money to someone you know wouldn't be able to pay you back? Of course not, so why did the banks? Simple: the rewards in the form of higher interest rates and charges obviously proved far too attractive to the unscrupulous greedy bankers. Once the banks had built up a sizable collection of these sub-prime borrowers, and the cash came rolling in, they started bundling this dangerous debt into very attractive investment bundles and resold them to other banks, hedge funds and other investors. Little did those bankers know their investment was effectively worthless or impossible to value. All they cared about was the 6 digit bonus they'd get at the end of the year.

And then it all went TU: the price of pretty much everything started going up on the back of the increase in the price of oil and grain (who said bio-diesel from corn was a good idea?). People couldn't afford to spend money anymore and food on the table will always win over against a roof over one's head, so people defaulted and the snowball started rolling.

I reckon the person who came up with this whole sub-prime reselling idea has probably cashed in all their investments, emptied their bank accounts and is now hiding away in some remote part of the world with bags of money stuffed under their bed. They just know they'll be lynched if this gets pinned on them.

Anyway, I know this is a very simplified view, I'm not an economist/analyst/financier, but I could see this coming in a way when banks started posting pre-completed and pre-approved credit card applications to me. Who in their right mind will give someone access to money when they don't know if they can afford it. It kind of contradicts the high security banks have. Why have it when you can just walk in and take a bit for yourself?

The effect of this bad banking? We have ski slopes for stock markets. Check the FTSE 100 and the DOW Jones since Monday: 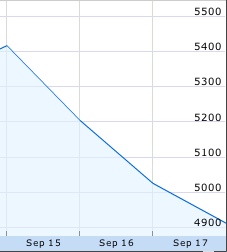 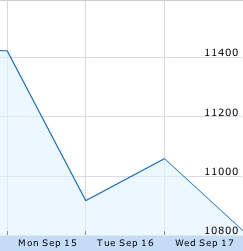 Impressive if you're a downhill skier, not so good if you're an investor. I'm a minor investor and I'm not too impressed to see my investments sink like this, though I'm not too concerned as I'm in it for the long run.

There is a plus side to all of this. If you've got a wad of cash stuffed under a mattress somewhere or sitting in a savings account earning you a millionth of a percent a year, I reckon Friday or Monday may be a good day to bung it in an index tracker ISA for the long run. The stock markets have lost on average 10% in three days. In the long run they're only going to make that up again, and if they do it in the next two years, that's a nice 5% PA return, TAX FREE!!!.

Unfortunately, my investing is on hold at the moment - honeymoons are a great way to spend money, and I intend on doing just that. Claire and I have been saving up for a good one, and a good one we will have.

Oh, and if you're in the UK, watch out for a new bank on the high street. It's either going to have a very very very big sign or a sign with teeny weeny writing to fit all the letters on. That is if the Lloyds TSB buyout of Halifax Bank of Scotland goes ahead, which it probably will :-)