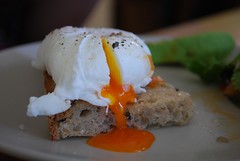 I've tried to cook poached eggs properly quite a few times now, and each time I end up with a small yolk covered in a little whilst stuff with lots and lots of wispy cooked egg white floating in the pan and not attached to the yoke. Well, I can say I've now finally mastered it thanks to a little eaves dropping on the train on Saturday morning.

If you take a look on Google for instructions on poaching an egg, you'll find loads of different people each stating their own secret of success. Delia Smith uses a shallow frying pan, Hugh Fearnley-Whittingstall and James Martin suggest stirring the water to create a vortex before dropping the egg in, others suggest wrapping the egg in cling film and popping it whole into the water, some suggest placing the egg in a cup (or similar device) and dropping that into the water and there are a plethora of other methods which fast approach coddling rather than poaching or over complication.

Saturday (put to test yesterday) I discovered the true secret to cooking poached eggs, with nothing more than a pan, water, 1 teaspoon of vinegar and eggs. No fancy gadgets, no clingfilm and no exacting science either.

So what's the secret? Well simple: stir your raw egg, whilst it's still in it's shell in the simmering water for about 10 seconds before cracking it and emptying the contents into the pan of simmering water. 10 seconds seems to be long enough to "start the magic" but not long enough to actually start cooking the egg or make it too hot that you can't hold it to crack it.

I cooked four eggs on the trot yesterday with only the slightest amount of watery wispy egg white soup at the end and best of all they looked like poached eggs and tasted good too. Sadly so good, I didn't have time to take a photo, so I've borrowed avlxyz's CC licensed picture from Flickr for this post.