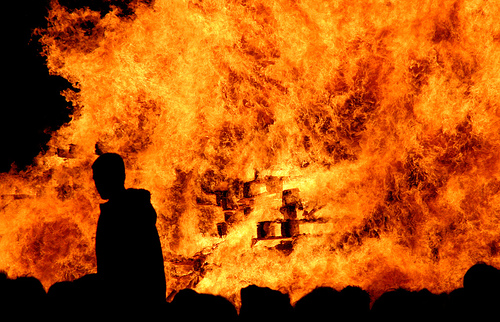 Tonight is Guy Fawkes night in the UK (and other ex-British colonies) and if you think about it, it's a celebration of terrorism by modern standards. Guy Fawkes was involved in a plot to blow up the Houses of Parliament and all those inside at the time, in an attempt to "destabilise" the country (and kill the King).

Of course, Guy Fawkes wasn't successful and he was caught before a match was lit. In return we celebrate his failure by burning an effigy of the man and set off fireworks, almost in an attempt to reproduce what we could have expected had he succeeded.

Now lets leap forward approximately 396 years to 11 September 2001, aka 9/11, when probably the most publicised act of terrorism in modern history occurred. Sadly, this act of terrorism happened and a lot of people died, but in the context of Guy Fawkes and 1605, how would we celebrate, if at all, the event had the hijackers been stopped and captured and the aeroplanes landed safe and sound?

I'm thinking flying paper aeroplanes into temporary structures and burning effigies of Osama bin Laden, but that's just my over-zealous imagination. Who knows, maybe that's how we'll celebrate the day the US do finally get their hands on Osama bin Laden