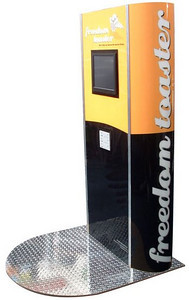 Mum's been watching a bit of techy TV recently (go_open on SABC2 - the World's first Open Source TV Show) and sent me a couple of links. One of which was for Ubuntu Linux, which I use already, but one of the others was for a fantastic idea... Freedom Toaster. To quote their own description:

What is the Freedom Toaster?
Linux and open source software for the masses via a conveniently located 'Bring 'n Burn' facility, known as a Freedom Toaster.

But why do we need this?
'Cause connectivity in South Africa adds a price tag to open source software. And we don't want long download times or costs to prohibit open source usage.

And the name? What's up with that?
Initially the name came about directly as a result of the fact that Linux is a free Operating System and that you toast a CD with Linux.

In the past, most people have shied away from Open Source Software, more particularly Operating Systems. Because, unless you where already an expert on various "scary" details that accompanied them, it’s been notoriously difficult to get your hands on reliable and complete distributions that where easy to install and easy to upgrade. Not anymore, now it’s as easy as toast.

What a brilliant idea, now everyone can get access to free software without much effort or the need for an internet connection, which can be a bit hard to get considering not all the townships that have electricity have a phone in each home. It also saves you an absolute bomb if all you have is a dial-up connection.