You've got to love the English being spoken by the "yoof" in England these days. Long gone are the days of them actually speaking English, but instead the kids speak some other language which I've still not quite fathomed. It does however appear to be a derivative of English and heavily associated, but not exclusively, with "chavs".

What I have worked out is (please correct me if I'm wrong - I'm still learning this new language):

I've probably missed a whole load of other "rules" of the language, but that's not the point of this post. What the point is is that this "yoof-speak" has now made it's way into classic English literature. Well, not exactly, rather a satirist has "translated" 15 of Shakespeare's works into "chav-speak" (How happy would he be being called Wills Chavspeare?).

You can now get abridged versions of classic titles such as To Be or Not to Be, Innit, Amlet, Romeo And His Fit Bitch Jools, Jools Caesar, Much Ado About Sod All, Offello, De Happy Bitches Of Windsor, Two Geezas Of Verona, Richard De Fird and All's Sweet That Ends Sweet, Innit. These have been written so these kids/chavs can experience a bit of Shakespeare, and understand it too. At the moment, it seems only the first one is available on Amazon, but I'm sure the rest will appear soon enough.

Here's an excerpt from Amlet and Jools Caesar to give you a taste of what you could expect: 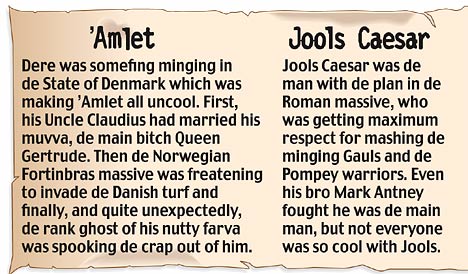