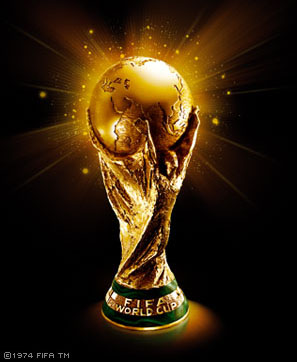 I can't say I'm the biggest fan of football these days (I don't support any particular team), but I do still like the international game. There is no better time for some good international football than during the World Cup, though it would be better if Bafana Bafana were playing. Oh well, at least we automatically qualify next time :-) .

Naturally, everyone in the UK has gone football mad, all the chavs have hung their St Georges crosses from their bedroom windows and attached little ones to their cars - my cruel little mind is already picturing some poor pedestrian being harpooned by one of these when someone accidentally opens a window at 40mph (60kph). I digress.

Of course with the World Cup comes all the world cup songs, and everyone comes up with some sort of catchy tune (except England's official song - whilst a good song, it's not really something that can be shouted from the rafters). And of course the radio stations are not going to let you forget all the old ones - I've heard Vindaloo and It's Coming Home about 400 times this week alone.

Most of the World Cup songs I've heard are generally just about how England's going to win sung or spoken over some other well known track - all a bit cheesy really. Well, on Thursday I heard a great little World Cup song by one of Radio 1's DJ's (Chris Moyles). Now this is what World Cup songs should be like.